Intellivy in Real Life: Use Case. How to Increase Sales by 58% with Microtesting 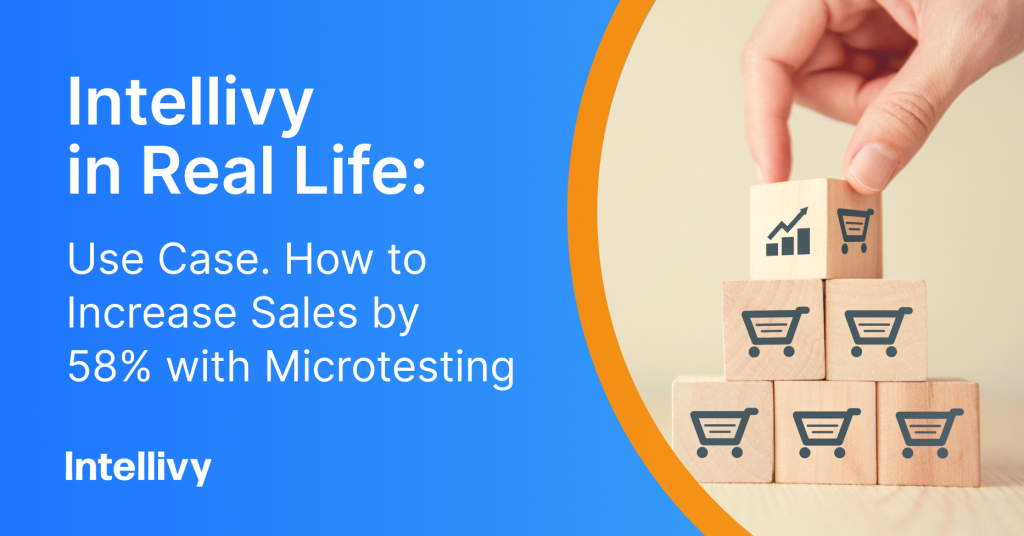 In this case study, we will show how Intellivy’s microtesting tool assisted the Amazon seller in optimizing listing photos, increasing CTR by 109% and boosting sales by 58%.

The case of Alex M., an Amazon seller

Intellivy assisted Alex M., an Amazon seller, in improving her product’s main image. Over one month, they saw a significant rise in their CTR and the number of units ordered:

A significant percentage of these results was achieved by changing the product image from old to new.

To begin the listing optimization process, the seller submitted the improved main picture, then paired the image optimization with a temporary (2-week) price decrease. As a result, sales began to rise dramatically, from 9000 BSR to 2000 BSR. Following a price increase, sales continued to grow, with drops as low as 1000 BSR.

A product you know might not become a best seller but has more potential than its current performance. Where to start? You can optimize your listing based on guesswork, but to do it right, you want to know the following:

And what we learned about this product was that the seller created a listing to sell handheld kitchen graters. The product was underperforming. The device took up a small percentage of the whole image, and the metal on the device appeared low in contrast. Furthermore, the functions were not readily apparent.

How were these results achieved?

It all started with putting down an anchor point to determine the current online situation before optimizing the image.

We did so with the killer feature of our platform, Marketplace Poll of Intellivy. In addition to comparing the main image of multiple listings, this poll type allows you to add a title, star rating, price, and discount coupons. In other words, you can use this poll to mimic the Amazon Marketplace.

Even with a discount coupon, our image (E) scored only 5% of the votes.

Research completion will show suppliers possibilities to stand out from the crowd in addition to helping to discover the competitors who you should compare yourself with. Sellers who thoroughly investigate and analyze the Amazon Marketplace can lower their risk of making poor judgments and raise the possibility that their products will sell more on Amazon.

After reading comments from voters and consulting our designer, we found possible reasons why the score of the product was low:

We aim not to adjust every image component simultaneously throughout the optimization process. Instead, our technique is to focus on one element and hold a poll to determine the best version of that one characteristic. Then, depending on that response, we conduct the following poll.

As you can see from the image, we concentrated entirely on the slicer. Our designer created three alternatives to see whether we could increase the slicer’s angle, contrast, and size. The remainder of the image is unaltered. Of course, we can see that other things may be improved, but the results of this vote will provide us with the optimum arrangement for the slicer.

We’re not looking for our image to be the clear winner in these polls.

Variant D surpasses the original picture (variation C). So we’re already gaining traction and getting a clear response that this angle and outward appearance of the slicer is superior.

Following our first Competitive Comparison Poll, we conducted another poll against the same two rivals (only our versions are displayed here), but we made no changes to the slicer itself. Instead, we utilized the best-performing slicer picture from the previous vote for all three iterations.

We discovered that voters frequently stated they liked the presented veggies and varied blades of the slicers on the competing photographs after reading the comments.

The results weren’t spectacular, but the package, which included displaying blades with veggies, outperformed the original packing. Getting rid of the packing and only displaying the blades improved the score. This seemed like the correct route to take.

The final graphic created by our designer depicts all the product’s characteristics. Displaying all the varied blade configurations allows it to compete much more effectively. The depiction of the food holder in hand above the slicer helps the client comprehend how it works while also offering extra room to highlight another fantastic feature of the product: the turntable blade, which protects your hands.

This image scored far higher than the previous versions. Therefore it’s time to go to the verification phase and publish it in a Marketplace Poll, exactly as in the original case. The final findings indicate a 120% increase in votes over the baseline poll we performed before the optimization procedure.

With this high price point, the image does not outperform its competitors but captures a far larger market share. Consider your CTR increase in terms of sales. In reality, the tailored image demonstrated by a strategic poll procedure aided the product is selling better.

A product doesn’t need to be a winner in our polls. Of course: everyone wants to have a bestseller. But in this case, that wasn’t achievable due to the price and features of the product. Then it’s about strategy and recognizing areas for improvement to increase sales.

Conclusions: How to optimize your listing

As our case study demonstrated, you should not rely on your gut instinct while making business decisions. Instead, running an optimization process proven by data from a strategic poll procedure is the formula for a significant rise in your click-through rate and revenue.

Develop a foundation for your conclusions and isolate components of your image to determine which variant of each aspect is best. Mind people’s comments for gold to find out what works to attract clicks.

Verify your optimized picture with a Marketplace Poll to check if it competes with the top sellers in your market and to see if your efforts result in increased CTR and sales.

We use cookies on our website to give you the most relevant experience by remembering your preferences and repeat visits. By clicking “Accept All”, you consent to the use of ALL the cookies. However, you may visit "Cookie Settings" to provide a controlled consent.
Cookie SettingsAccept All
Manage consent

This website uses cookies to improve your experience while you navigate through the website. Out of these, the cookies that are categorized as necessary are stored on your browser as they are essential for the working of basic functionalities of the website. We also use third-party cookies that help us analyze and understand how you use this website. These cookies will be stored in your browser only with your consent. You also have the option to opt-out of these cookies. But opting out of some of these cookies may affect your browsing experience.
Necessary Always Enabled
Necessary cookies are absolutely essential for the website to function properly. These cookies ensure basic functionalities and security features of the website, anonymously.
Functional
Functional cookies help to perform certain functionalities like sharing the content of the website on social media platforms, collect feedbacks, and other third-party features.
Performance
Performance cookies are used to understand and analyze the key performance indexes of the website which helps in delivering a better user experience for the visitors.
Analytics
Analytical cookies are used to understand how visitors interact with the website. These cookies help provide information on metrics the number of visitors, bounce rate, traffic source, etc.
Advertisement
Advertisement cookies are used to provide visitors with relevant ads and marketing campaigns. These cookies track visitors across websites and collect information to provide customized ads.
Others
Other uncategorized cookies are those that are being analyzed and have not been classified into a category as yet.
SAVE & ACCEPT

320k+ consumers are waiting to respond to your questions

Whether you’re a solo entrepreneur, or you have an entire team behind your e-commerce business, we have the right polling tool for you.

This poll is designed to compare your product against your competitors in a realistically simulated marketplace. You get instant feedback and a ton of insights.

Consider this poll as your online testing ground to test multiple images, titles, etc. to see what wins so you can start taking market share from your competitors.

The user has to rank images to the best order based on the question.

Please select a time slot for your call